I've got 2 problems after install Ice Cream Sandwich into my Samsung Galaxy S2 and now it solved.

Before that, this is my 4th time installed ICS to replace Gingerbread into my SGS2 with 3 previous attempt failed.

1st attempt in October 2011 (a few days after it public release) 4.0.1, but failed. Nearly brick my phone, it didn't boot and stuck in factory recovery mode like picture below. 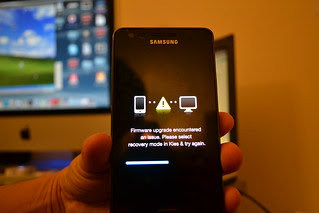 then what I've DONE :

-  Connect it into PC via USB then fire up ODIN (but nothing happened, as USB don't recognize it).
-  Then I reboot my PC and SGS2, now open KIES and connect SGS2 via USB.
-  When USB finished installed it driver, close KIES and open ODIN.
-  Then flash Original Stock FW,(I did it 2 times).

Then it start new problem 'bootloop',

- I completely switch off SGS2.
- Removed the battery and put it back then remove and put it back again (twice).
- Then boot in recovery mode (simultaneously push and hold 'Vol UP' + 'HOME' + 'Power' buttons and clear dalvik cache.

Then I tried install ICS again using ODIN with factory reset first and it succeed, but because it to early stage of ICS on SGS2, my contact, play store, internet, camera and a few others apps always 'Force Close'. So I revert back to my stable Gingerbread 2.3.4 (XWKI4).


2nd attempt in March 2012, this from On The Air (OTA or FOTA). and it failed to install because my SGS2 was previously installFW from ODIN.

Here my video of it :

To solve this problem, it need to reflash original stock firmware (I didn't do it because I want to install it from ODIN)


So now in May 2012 on the day Samsung Unpack it latest SAMSUNG GALAXY S3, I install latest Android 4.0.3 (Ice Cream Sandwich), with 3rd attempt I used Firmware downloaded from XDA-developer forum (Official i9100 FW XUE (UK); I9100XWLP7_I9100XXLPS_I9100XEULP5), and it failed like my 1st attempt ('Firmware upgrade encountered an issue,...'). then I reflash original FW like what I did in 1st attempt.

After that I try flash another FW, also downloaded from XDA-DEVELOPER Forum (GT-I9100_CPW_I9100XWLP7_I9100XXLPS_I9100CPWLP5), official FW CPW (UK). but this time I did it with out factory reset or clearing any cache or any reset/wipe. then it flashed smooth and straight forward.


But after that I've encounter 2 issues :

1. Google Play Store - can browse and download any apps or update apps, but keep 'Error' or 'Force  Close' everytime it installing an apps.

and what I do exactly  ;
1. Remove Market with System App Remover (Titanium removes but you need to reboot twice).
2. Install new market apk via a file manager.
3. Convert to system app with Titanium Backup. (Just got Loading... message without this.)